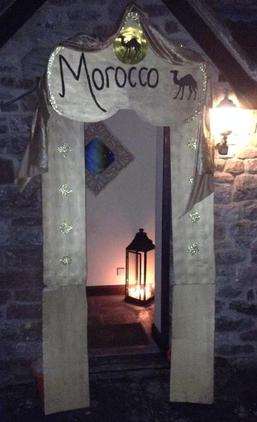 A Moroccan themed evening was provided by the red team on Saturday to raise funds for the club.  Ladies clad in Moroccan clothing met the blues with an eerie silence outside, and were lead to the venue on foot with candles flickering in the darkness.  The food was an absolute delight, coupled with the decor and music, you could have easily believed you were in Marrakesh itself.  The entertainment started with a game centered around a rather large camel, then onlookers were amazed by Michelle's skill with a hula hoop (in contrast to others who gave a good show trying!).  Games concluded with a spice tasting sesh but the night continued filled with much frivolity - if only there was forethought to film the whole evening - reckon there would have been a fair few Youtube hits.  Nice one reds!